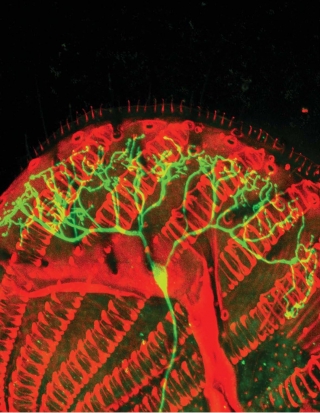 It’s a problem that parents know all too well: a child won’t eat because their oatmeal is too slimy or a slice of apple is too hard. Is the kid just being finicky? Or is there a biological basis for disliking food based on its texture? This image, showing the tongue (red) of a fruit fly (Drosophila melanogaster), provides some of the first evidence that biology could indeed play a role [1].

The image shows a newly discovered mechanosensory nerve cell (green), which is called md-L, short for multidendritic neuron in the labellum. When the fly extends its tongue to eat, the hair bristles (short red lines) on its surface bend in proportion to the consistency of the food. If a bristle is bent hard enough, the force is detected at its base by one of the arms of an md-L neuron. In response, the arm shoots off an electrical signal that’s relayed to the central part of the neuron and onward to the brain via the outgoing informational arm, or axon.

What’s interesting is the md-L axon connects directly to the brain’s taste center. That’s where incoming signals arrive from other neurons at the base of the hair bristle that offer information about the taste of this food item. All the information is integrated into one immediate choice: to eat or not to eat? If the textural concern from the md-L neuron is prominent enough to override the attraction of taste, the fruit fly will look elsewhere for its next meal.

While the fruit fly might seem to have little in common with a human—after all, our last common ancestor dates back roughly 800 million years—we share a surprising number of biological similarities. In fact, exploring those similarities is what led Yali Zhang, a postdoctoral student in the lab of Craig Montell at the University of California, Santa Barbara, to snap this micrograph.

Zhang began his work with the intent of finding out which fruit fly cells make a transmembrane channel-like (TMC) protein, which is thought to help a wide range of organisms sense a variety of mechanical forces. Humans make several versions of TMC, one of which may play a key role in hearing when it is activated by sound in the hair cells of the ear.

However, when Zhang looked at the fruit fly through his confocal microscope, he was surprised to see that TMC was expressed in the tongue, specifically in the md-L neurons! Because Zhang and Montell knew that the chemical-sensing, or taste, cells in the Drosophila tongue had already been discovered and TMC is thought to be a mechanosensor in the human ear, they hypothesized that md-L neurons might be involved in registering mechanical sensations, such as the texture of food.

The team has generated experimental evidence to support that hypothesis, including this micrograph that just took top honors in the 2017 Drosophila Image Award contest, sponsored by the Genetics Society of America. If you like this image, be sure to check out the other 2017 winner, along with past winners back to 2004. All images are evaluated not only for their eye-catching qualities, but for the importance of their research and the clarity with which they show the results. In other words, for the beauty and the science!