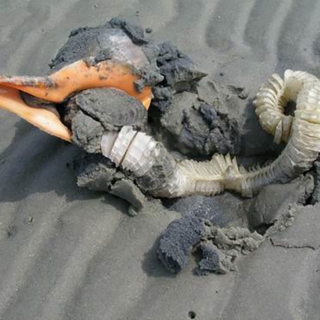 Self healing in the context of living organisms is usually associated with cell-mediated processes as in platelet-mediated blood coagulation after a cut. Some biomaterials, however, show intrinsic healing not dependent on cells. Intrinsic self-healing is nowhere capable of rejoining severed ends or replacing lost material. It is manifested instead in a time-dependent recovery of modulus and initial length after exceeding the yield stress- a critical property of materials. Marine snail egg capsules (Busycon) and mussel byssal threads are particularly interesting in this regard. When subjected to cyclic loading in tension both exhibit high initial stiffness (modulus) that yields at 30% extension in the case of the egg capsule. Normally this would spell the demise of a synthetic material. In egg capsules, however, recovery is nearly spontaneous. The next cycle is superimposable with the first. In mussel byssal threads the outward trajectory of the first stress-strain cycle resembles the egg capsule's with yield occurring at about 20% extension but recovery exhibits greater hysteresis, and the modulus of the subsequent cycle is reduced by more than 75%. Unlike the egg capsule, full recovery takes several hours. Significant or full recovery does eventually occur. Based on detailed analyses of byssal proteins, a model has been constructed to explain and reconcile molecular structure with mechanical behavior. The byssal thread core is derived from a self-assembling mesophase based on two different bent-core hybrid collagens called preCOLs. PreCOL-D has flanking silk-like domains, whereas preCOL NG has Gly-rich flanking sequences. Both have histidine-rich N- and C-terminal domains that resemble the chemistry of the jaw proteins in the previous section. The histidine-rich termini of two consecutive preCOLs are connected by transition metal ions such as Zn and Cu. During loading in tension the preCOL-Ds, which are bearing more of the load due to their greater stiffness (silk domains), reach a yieldpoint. Here the histidine-metal bridges break thus releasing hidden lengths and transferring the load to the preCOL-NG network, which is softer and more extensible. The elastic recoil of the preCOL-NGs eventually returns the His and metal ions to their original positions so that the bridges can reform.

One of the most beautiful features of byssal threads is their gradient design in block domains. In the distal to proximal direction, preCOL-D is gradually replaced by preCOL-P. Although these two molecules are superficially similar in shape, they differ in having flanking domains at the exteme ends of the mechanical spectrum: The stiff silk-like domains in D become the soft elastin domains in preCOL-P. Thus, upon converging with the stem and living tissue of the foot, the modulus of each thread has been reduced to a tenth of where it started.

Gradient materials and self-healing materials have been on materials wish lists in aeronautical engineering, electronics and biomedical materials for many years.

Investigating metal-mediated interactions at the interface using a combination of atomic force microscopy, quartz crystal microbalance and Raman spectroscopy. Information gained from this research may provide a platform for the development of mechanically robust, biocompatible materials.

Understanding how the chemistry, component and structure of the mussel cuticle affects its function as a potential inspiration for development of future robust material.

Using mechanical testing and microscopy to understand mechanisms of energy dissipation in the native mussel plaque.