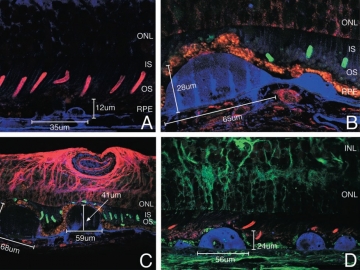 One of the reasons for studying development is this: perhaps knowledge gained would be useful in designing treatments for degenerative diseases. If we could kick start the developmental program in a degenerating retina, perhaps we could alleviate disease. Recently, we have begun collaborating with the Center for the Study of Macular Degeneration (CSMD) within the Neuroscience Research Institute at UCSB, with the intent of establishing a second research emphasis in retinal disease.

Loss of vision in Age-Related Macular Degeneration (AMD), a leading cause of blindness in this country, is a result of degeneration of rods and cones in the macular region of the central retina, which is responsible for high acuity vision. Death of the photoreceptors appears to be a consequence of degeneration of neighboring RPE cells. The disease is poorly understood and there is no good treatment or cure.

The formation of drusen, abnormal deposits in the ECM, is an important hallmark of AMD. Typically, drusen lie between the RPE basement membrane and the inner collagenous layer of Bruch's membrane and contain a variety of ECM and molecules. Some investigators have hypothesized that drusen may result from the failure to dispose of RPE-derived molecules (including ECM), or may be due in part to an inflammatory immune reaction. Drusen formation appears to precede the occurrence of visual symptoms in AMD eyes and is hypothesized to be a cause of the disease. The molecular events that underlie drusen formation are not well established.

Our interest in AMD was sparked by the apparent involvement of the ECM in disease progression. Mutations in the Tissue Inhibitor of Metalloproteinase-3 (TIMP-3) have been linked to Sorsby's Fundus Dystrophy, a blinding eye disease with some similarities to AMD. We investigated the distribution and activity of matrix metalloproteinases (MMPs) and TIMPS in human RPE-choroid from donor eyes with and without a clinical history of AMD. We found that TIMP-3 is concentrated in drusen, and that drusen are coldspots for proteolysis activity.

In addition, mutations in a family of ECM proteins called fibulins have recently been shown to give rise to AMD. We have initiated studies of the basic biology of fibulin-5 and fibulin-6, and have shown that these are expressed by RPE and are components of drusen. Future experiments will examine fibulin functions as well as expression of fibulins in human RPE-choroid from donor eyes with and without a clinical history of AMD.

We are also investigating the role of ECM proteins in other eye conditions. We have recently found evidence that osteopontin contributes to disease progression in several mouse models of eye disease by recruiting immune cells to damaged areas. Models under study include experimental immune uveitis (an autoimmune disease) and glaucoma. New experiments indicate a role for ostepontin in a mouse model of exitotoxcity related to glaucoma.