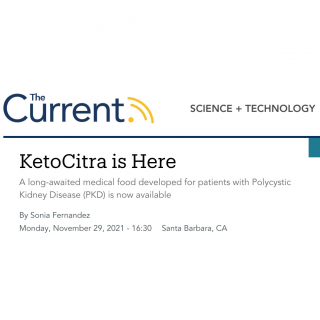 There is no cure for this common disease that affects more than half a million people in the United States alone. Most PKD patients eventually require dialysis or kidney transplantation. KetoCitra, taken under medical supervision in conjunction with a kidney-friendly diet, offers those with mild to moderate PKD a potential alternative to beneficially manage their disease by mitigating the aggravating effects of a standard American diet.

“I’m very happy that we actually were able to do all this,” said Thomas Weimbs, a professor in molecular, cellular, and developmental biology, whose primary research focus has been on the molecular mechanisms underlying polycystic kidney disease and related renal diseases. In the more than 20 years of his career spent studying kidney conditions, progress via pharmaceutical offerings has remained limited. However, research from Weimbs’ UCSB lab recently showed that dietary interventions were highly promising.

The idea for KetoCitra came to Weimbs and research colleague Jacob Torres almost three years ago after some significant discoveries. One finding was of a previously unknown mechanism that accelerated cyst formation; the other was that the metabolic state of ketosis was very powerful at stopping and even reversing the condition in animal models. It turned out that the specific metabolic defects caused by the disease make the polycystic kidneys more sensitive to stress caused by typical Western diets and lifestyles that include high-carbohydrate foods and other renal stressors contained in foods.

And perhaps just as significant: The substances needed to counter-balance the negative effects of Western diets — citrate and beta-hydroxybutyrate (BHB), respectively — were widely available, food-grade ingredients available at grocery stores.

“Citrate is essentially citric acid — you find it in the grocery store for baking and so on,” Weimbs said. “It’s also a very powerful, natural antagonist of crystal formation in the kidneys and that’s what our kidneys use.” BHB, meanwhile, is more widely known as a ketone, which is naturally produced during fasting, and also a popular supplement for dieters on the popular ketogenic diet. In the researchers’ studies, polycystic rats given BHB demonstrated a shrinkage in their cysts over time.

“We realized when we combined the citrate and the ketone, we actually get a synergistic effect,” Weimbs said. “So the combination works better than either of them alone.”

That was the good news. The not-so-good news was that while citric acid and BHB could be obtained easily, they were so widely available that it was unlikely to be a worthy investment for any pharmaceutical companies.

“No pharmaceutical company would be interested doing anything with it because essentially, they couldn’t make money from it since you can just get it anywhere,” Weimbs said. The other issue was that commercially available BHB supplements were always formulated with other ingredients and fillers that could be harmful to already-compromised kidneys.

So they decided to bridge that gap and create their own kidney-safe formulation. Two years, one pandemic and one patent later, KetoCitra was born. As a “medical food,” it occupies a niche distinct from other substances the Food and Drug Administration regulates, such as drugs and supplements.

“Medical foods can only contain ingredients that are GRAS — generally recognized as safe,” Weimbs explained. As such, they don’t require the layers of review and approval the FDA reserves for drugs. Unlike supplements, medical foods can state the conditions they intend to manage; unlike drugs, medical foods can’t claim to cure any disease.

“Medical foods are to be taken under medical supervision,” Weimbs said. “I think it’s a good thing, and it was actually one of the reasons why we decided to make this a medical food. We want to make sure there’s a healthcare practitioner involved.” The physician would determine whether something like KetoCitra would be appropriate for their patient based on factors such as blood chemistry and how far the disease has progressed. They would continue to monitor their patient at regular intervals while they use the medical food.

“While the medical food can be taken by the patient without additional dietary changes, for the most benefit it should be used in conjunction with sensible diets,” said Weimbs, adding that KetoCitra “is not a magic bullet” for people with PKD if they continue to eat in ways that could harm their kidneys.

“It would be a good idea to first clean up your diet and lifestyle a little bit,” Weimbs said. “And then I think it makes sense to combine it with some KetoCitra.”

Weimbs has worked with a group of renal dietitians to create the “Ren.Nu” program, an online training program for PKD patients interested in learning how to implement the recommended dietary and lifestyle changes. Clinical trials are in the planning to measure the long-term benefits of these changes.

KetoCitra can be found at Santa Barbara Nutrients, a benefit corporation established by Weimbs and Torres to offer the product, as well as nutritional advice and research on kidney health.

“Translating our basic research into an actual product has been a new and really interesting experience for me,” said Weimbs, who has until now been on the basic research end of the science continuum. “We have a fantastic team — quite a few people on the team actually have polycystic kidney disease, and I think it’s quite unique and useful for a company like this.”