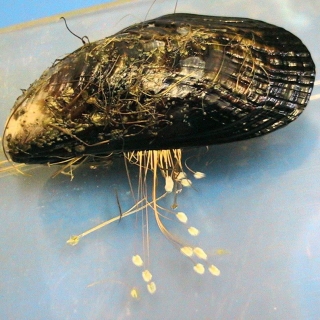 With few exceptions, water is the nemesis of adhesive bonding, at least of commercial adhesives. Not only does it prevent robust surface bonding by polymers, but water can wick into and disrupt interfaces engineered under the best clean-room conditions. How then can mussels Mytilus and sandcastle worms Phragmatopoma attach and stay attached to hard surfaces in the sea? Most adhesives rely on a combination of noncovalent interactions with surface groups and mechanical interlocking with surface roughness to stick. Common interactions include salt bridges, H-bonds and van der Waals. These are largely compromised by the dielectric constant of the water (approximately 80) as exemplified by Coulomb's law.

The structural architecture of mussel and worm adhesives is foam-like with a thin cuticular coating. Moreover, in the case of mussel byssus, collagen fibers from the thread core are deeply rooted in the foam. One hypothesis to account for the success of marine invertebrate adhesives is that they rely more heavily on interfacial interactions that are not governed by the dielectric of the medium. We have used laser desorption techniques to interrogate the footprints of adhesive plaques and have discovered two families of proteins that contain up to 30 mol% 3, 4-dihydroxyphenylalanine (dopa). Dopa has long been implicated in quinone-tanning, thus its role in cross-linking and consequent cohesion is well established. The high levels of uncross-linked dopa in mfp-3 and -5 at the adhesive interface were unexpected and suggest another, different activity. Other common residues in these proteins are glycine, asparagine and lysine.

To explore the role of dopa, the Messersmith group at Northwestern University recently tethered single Dopa residues to AFM cantilever tips and observed that the energy to break tip-tethered Dopa from a titanium oxide surface in water was about 130 kJ/mol, which is much higher than any noncovalent interaction. The interaction of Dopa with TiO2 appears to be a charge-transfer complex or coordinate bond.

Investigating metal-mediated interactions at the interface using a combination of atomic force microscopy, quartz crystal microbalance and Raman spectroscopy. Information gained from this research may provide a platform for the development of mechanically robust, biocompatible materials.

Investigating catechol reactions by electrochemistry and exploring the role of coacervates on adhesion and chemical composition of mussel adhesive plaques under different conditions.

My research focuses on linking mussel adhesion properties to the mechanical profile of the substrate. These investigations involve morphological and structural examinations on a macro- and nanoscale, as well as screening and mapping protein expression.